December 2009 brought the fulfillment of a dream held by both Chuck and Nancy Missler. They had just purchased The River Lodge in Reporoa, New Zealand. It was the conclusion of a ten-year journey to find their new home in paradise. Nancy called it their “L’Abri of the South Pacific.” The term L’Abri, which means “take shelter” in French, was the name of a community founded in Switzerland in 1955 by Francis and Edith Schaeffer.1 The Misslers hoped to create a “shelter” for their ministry away from the gathering storm clouds rising over America during the late 1990s through 2000s.

Once fully relocated, both Chuck and Nancy began holding conferences and meetings at their newly established base of operation. By early 2012, my wife Marcie, myself, and our K-House team from the UK had joined them to help them see the complete fulfillment of their dream. The next seven years would be filled with many unplanned changes, challenges, and disappointments to say the least. Undeterred, we all charged ahead into the new future of Koinonia House. Early on, Nancy would repeatedly say that “we are here to save Chuck’s voice,” so thus we moved as the Lord opened and closed doors ahead of us.

With the passing of Nancy in 2015 and the passing of Chuck in 2018, the ministry’s emphasis shifted from releasing live materials to legacy materials. Surprisingly we saw exponential growth as we reached out to a wider audience through various social media portals. For example, our YouTube channel hit over 180,000 subscribers, and our online school, Koinonia Institute, grew to more than 23,000 students. In 2019 we restarted our Israel tours with the help of Bob Cornuke, and all seemed to be full-steam-ahead for the future of K-House. 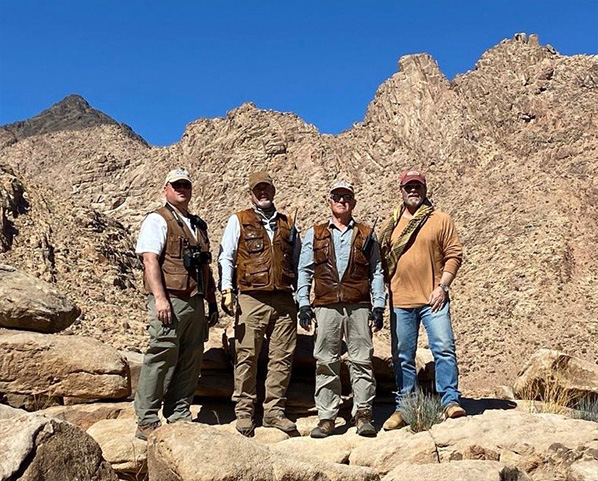 2020 began on a high note for me as I led an expedition to Saudi Arabia to investigate the claims and evidence for the Exodus. Bob Cornuke, Jim Schmidt, my son Ben, and I traveled around various sites where we documented many amazing findings that could be the evidence we were looking for. As we were making our way back to the States, the global news networks were aflame with reports of an unstoppable pandemic.

Ben and I reached our home in New Zealand just in time to experience a nationwide lockdown. Confined to our respective homes and solely dependent upon the news services to keep us informed, we watched as the whole world seemed to be swallowed up by fear of this previously unknown pathogen. By observing the responses of governments and the reaction of the people, I could clearly see Biblical patterns beginning to appear. In my article, “Lockdown - Foreshadowing the Final Age?”2 which was published in the April 2020 “Personal Update News Journal,”
I pointed out many current events that were running closely with what the Bible says will happen in the final days of mankind.

Being an isolated island, New Zealand closed its borders relatively quickly and seemed to initially avoid the mass hysteria that was gripping the rest of the world as the Prime Minister enacted a four-phase lockdown protocol that closely resembled the policies of the policies of major nations around the world. But, as soon as the attention of the nation was transfixed on the perils of the pandemic, the New Zealand government passed the most extreme abortion law, which would allow up to full-term abortion as well as sex-selective abortion.3 In May of 2020, as a part of the COVID-19 Public Health Response Act 2020, the New Zealand Parliament passed a controversial new law that allows police officers to search homes without a warrant.4 Once again, while the nation was slowly gaining its freedoms after the severe isolation of medical lockdown, the government was preparing for their next step in gaining total control over their sleeping public.

In anticipation of the coming “COVID-19 Vaccines,” Prime Minister Jacinda Ardern said in an August 2020 interview, “there’s no need to make a vaccine compulsory in New Zealand. And I have to say that once we have that vaccination available and out, then it is on everyone’s individual risk – if they choose not to, they are putting their own health at risk.”5

COVID-19 vaccinations in New Zealand began on 20 February 2021. At the outset, the Pfizer mRNA gene therapy was the only approved jab allowed into the country. At first, the shots were optional but heavily encouraged by the government. But rapidly, the tone of the Prime Minister changed from that of it being optional to being required. When, on 17 August 2021, the New Zealand Health Department identified just one case of the new COVID-19 Delta variant appearing in the Auckland area, the Prime Minister announced that the entire Auckland region of 1.63 million people would be locked down at the highest level.6 This show of absolute power shocked even the most complimentary followers of PM Jacinda Ardern. These extreme measures continued for fifteen weeks.

On 23 October 2021, PM Ardern announced a new system of requirements and restrictions. Called the “Traffic Light System,” this new approach carried some real bombshells to the waiting public. She proudly announced a “No jab, no job” requirement that would affect the whole nation.7 During this landmark speech, she added that there would be a separation of the “vaccinated and the non-vaccinated,” creating an Apartheid State within New Zealand.

It quickly became evident that these restrictions were very wide-reaching. New Zealand placed a ban on all non-vaccinated air and sea travelers,8 but then opened restaurants, gyms, and public venues to only those with an up-to-date vaccine passport. The non-vaccinated are to be excluded from some basic services like not being able to get a haircut, go to a hairdresser, go to any library, or take a practical driving test9. “My message to the New Zealanders who have not yet had their first dose: If you want summer, if you want to go to bars and restaurants, get vaccinated,” Ardern said. “If you want to get a haircut, get vaccinated. If you want to go to a concert, or a festival, get vaccinated.”10

Church pastors were also told that if they wanted to hold services during a RED traffic light for more than 25 people who are spaced at 2-meter distance from each other, they would need to register their facilities as “Vaccine Only” premises. Failure to comply would result in a NZ$15,000 fine.

The ramification of this last stage of tyrannical control was the final alarm bell for me as I could only see one alternative for the physical ministry of Koinonia House in New Zealand. After much prayer and counsel, I called a meeting of the staff of K-House New Zealand on Sunday, 25 October, and told them that it was not safe for the ministry to have its headquarters in a country that was going in this direction. I then gave each employee the opportunity to choose if they wanted to stay in New Zealand and work remotely (if their job requirements allowed it) or try and come to our home office in Idaho, USA.

Simultaneously, we also discovered that USA President Joe Biden had issued a Presidential Proclamation that as of 8 November 2021, all non-Americans traveling by air to the United States must be fully vaccinated.11 Suddenly we found ourselves with a very small window of time to extricate all the non-American citizens that would need to be in the States before this sudden closing date. Like refugees fleeing for their lives, seventeen family members of our K-House team quickly packed what they could carry and safely traveled to Idaho before the 8 November deadline. Within just two weeks of the PM Ardern announcement, phase one of our exodus was completed.

With the exodus of our non-American staff and families, I ended our ongoing Friday Fellowship group here at The River Lodge on 12 November. As we finished our verse-by-verse study of Paul’s Letter to the Philippians, I found that the text gave me the much-needed words I wanted so I could inform these sweet friends and fellow workers in the Body of Christ of our sudden and unexpected departure. For those of you who were following our ongoing studies on YouTube, we stopped publishing them after session three but, trust me, the other five studies that round out the book will be uploaded in the new year, Lord willing.

For those of us who were left behind (no pun intended), we had the job of packing the personal items of the families that had quickly gone before, as well as the K-House NZ office items and sending them off on their slow journey to the USA. All of this needed to be completed before the middle of December. Then there was the issue of dealing with The River Lodge. That has its problems which are ongoing as I write this article. Like reading any exciting story, we shall see what God has yet in store for this very special place.

By now, you can see that we desperately need your prayer support during this precarious period of transition. Except for Marcie and me, all our New Zealand staff will have various degrees of US Immigration issues. Some employees have non-American spouses and/or children, which will require special handling. Others are Kiwis who are seeking some way to find shelter from the tyranny that now exists in their homeland. The staff remaining in New Zealand also need your prayers as they carry on with our down-sized ministry.

When Chuck and Nancy first arrived in New Zealand, they proudly told everyone that they were so committed to staying in New Zealand they bought their burial site in the Reporoa Cemetery. As time moved on, we committed their physical bodies to their chosen site and raised up a simple tombstone. As I was considering our current predicament of needing to move the operation back to its place of origin, I pondered the thought of leaving the very place they chose for their remains to lay in anticipation of the resurrection.

Up until this point in time, I always felt it was appropriate to have the founders of Koinonia House buried close to the current headquarters of the ministry. I was then reminded of a conversation that Chuck had with my son Matt and me early on during our office setup time here in New Zealand. When asked why he wanted to be buried here, Chuck simply stated that he wanted a grave in a place where it could never become a place of pilgrimage. He said, “The only memorial I want is one that points people to Jesus, not me.” Like the grave of Moses, it may one day be forgotten, but the “voice of Chuck” has been preserved for generations to come, Lord willing! 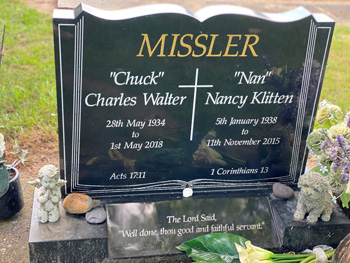 God bless you all,

This article was originally published in the
January 2022 Personal Update News Journal.