We took our usual route on this years study tour of Israel: up the coast from Caesarea to Mt. Carmel and the Jezreel Valley, then across Nazareth to the Galilee. We made a seaside hotel our base while in the Galilee, and our excursions there included a shipboard study between Tiberias and Capernaum as well as circumnavigating the lake.

One of the distinctives of this trip over previous years was the astonishing excavations that have been completed at Caesarea, Beth Shean, and the southern wall of the Temple Mount. The additional sites have been incredibly well done and were a very pleasant surprise to all of us"even those who have been here many times before. 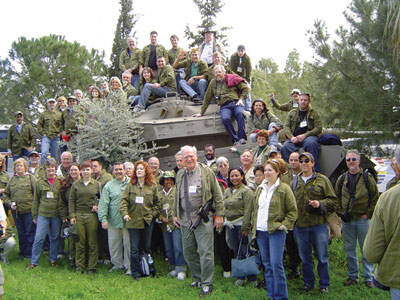 We also spent a day volunteering with the Israeli Defense Forces in the Golan. We were with a tank battalion that would be shortly departing for Gaza. (This was particularly interesting to me as I once had a platoon of five tanks while making landing exercises with the Marines at their amphibious base at Little Creek, Virginia.) We had a briefing on the various features of the Merkava-- (Chariot), their primary battle tank.

The work we were assigned was, of course, menial: painting, assisting assembling plywood training faades, etc. The idea was simply to demonstrate support.

What was particularly interesting was to spend time with some of the troops personally. They have absolutely no fear of the enemy: they are well trained and well equipped. What devastates them, however, is what they see on CNN! When they see themselves on the news, there is absolutely no relationship between what is represented on television and what is actually happening. The consistent misrepresentations crush them.

It was a real morale boost to have over one hundred of us spend a day showing support, etc. (And it was, indeed, a real blast for us, too!) 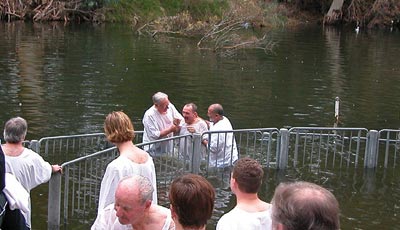 The highlight for many of our group were the baptisms in the Jordan: we baptized 69 of our gang and that is always a special time on our way from Galilee to Jerusalem.

The excursions in and around Jerusalem included the new excavations at the southern wall of the Temple Mount, the Temple Mount itself, the Mount of Olives, Gethsemane, and, of course, the Garden Tomb. (Communion at the empty tomb is the emotional highlight for most of us, no matter how often weve been there)

Invitation to the Knesset

While still in the United States, I was approached by a member of the Knesset and was invited to come to the Knesset (the Israeli parliament) and to participate in the Christian Allies Caucus, a project to improve the relations between Israel and the Christians in America. (They are beginning to appreciate the distinctions between the various segments that make up the different denominations, etc.)

So while in Jerusalem we had an opportunity to witness an actual session of the Knesset (less than 50 feet from Prime Minister Sharon!) We also met with the leaders of the Christian Allies Caucus and have been invited to participate in the Jerusalem Summit, which will be held in Dallas/Ft. Worth in early September. (Watch our schedule for details.)

These study tours are always fabulous experiences, and we plan to include more of them in our schedule and also incorporate them with our other learning materials and resources. We are planning some rather unusual study tours later this year: watch for announcements on the website and in this journal.

This article was originally published in the
April 2005 Personal Update News Journal.

Israel and the PLO: The Media (BBC) vs. Reality

A Contribution by Benjamin Netanyahu: Lessons from the Sudetenland