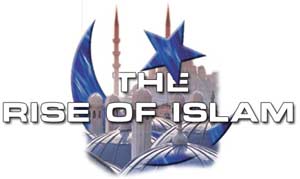 With the attack on the World Trade Center and the Pentagon on September 11, 2001, it has become of paramount importance to understand the origin, nature, and agenda of Islam. While there is no intent here to impugn the many peace-loving Muslims with the aggressive actions of the militant leadership, it is critical to recognize this most threatening challenge to Christians, Jews, and to Western civilization.

Contrary to popular understanding, Islam did not begin with Mohammad. Most of the practices still embodied in Islam had their beginning in pre-Islamic Arabia. Mohammad repackaged the pagan worship associated with the Ka’aba in Mecca into a monotheistic form.

The West is Blind to the Coming Religious War November 24, 2014

End Times The Reemergence of Assyria? by Ron Matsen

The Middle East A Man-Made Disaster by Dr. Steve Elwart

The Middle East and Islam Dangerous Games by Barry Rubin

Rise of Islam The Truth of Taqiyya by Mary Gehl

Note: These links are provided for your further research and education. Koinonia House does not necessarily agree with the information on these sites or support the specific organizations.

66/40 - The Sword of Allah - This briefing will bring you an Islamic update as well as give you a look at its surprising occultic origins.

66/40 - Roots Of War - On September 11, 2001, Islamic extremists shook the world. 'The Roots of War' will update you on the history of the Middle East since the fall of the Roman Empire.

Special Events - Terrorism in America: A Christian Perspective - Find out about the trends that led up to the terrorist attack on September 11th.

Avi Lipkin - Mid-East Update - This message was originally given in the Koinonia House auditorium on July 10th, 2001.

Notes and References on Islam by Chuck Missler -

How Did Jerusalem come to be so holy to Moslems? - Islam and the Holy Land

The Quran in English -

Taliban invokes Jihad against U.S.A. - Mullah's decree binding on Afghanis and all Muslims

Explosion rocks Christian area of Lebanon - An explosion has rocked a commercial center in a Christian suburb north of Beirut, wounding at least five people, according to reports from the Lebanese Broadcasting Corporation.

Sudan Clashes Continue After Death of Rebel Leader - Northern and southern Sudanese clashed in Khartoum on Tuesday in a second day of violence sparked by the death of ex-rebel leader John Garang who helped end two decades of war in Africa's largest country.

Poll: Americans' Views of Islam Warming - Details of a new poll by the Pew Research Center show that the majority of Americans hold a favorable opinion of the Islamic religion despite the recent terrorist attacks.

First Islamic Bank to Open in UK - Banking regulators say they have given permission for the UK's first purely Islamic bank to start operating.

Canada Weighs Using Muslim Law - In Muslim neighborhoods in Canada, some women fear legal power will be handed to their religious leaders.

View the Complete Library of Links