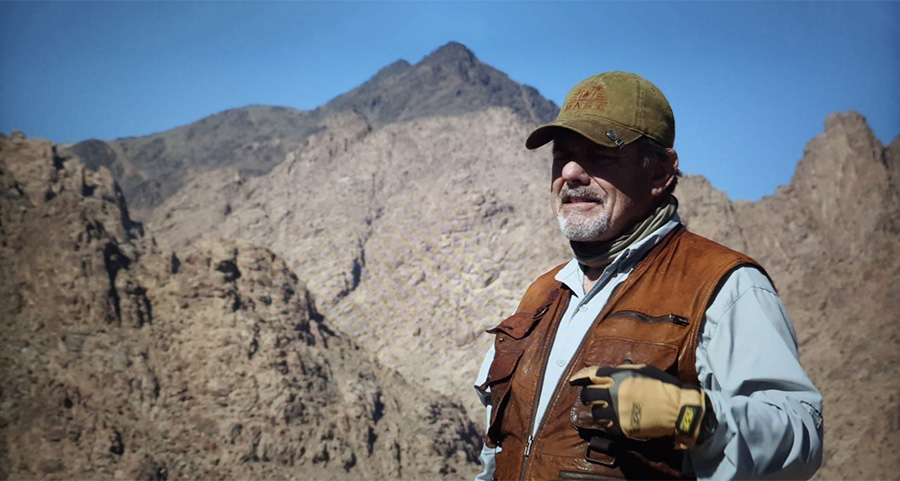 It had been thirty-two years since I ventured into the blistering Saudi Arabian desert with Larry Williams. I never really thought I would ever be allowed to return to that mysterious mountain the locals call Jabaal Musa (Mountain of Moses). But there I was with Ron Matsen and his son Ben, along with movie producer Jim Schmidt. In February of 2020, we saw an opening to visit and explore what many have come to call the Real Mount Sinai. Being there again seemed quite surreal.

Thirty-two years earlier, Larry and I caused a real sensation when we brought back photographic images of that black-peaked mountain. Many began to question if those burnt appearing stones atop the mountain could actually be the result of God descending on Mount Sinai in flames like a furnace. Many other landmarks photographed then matched in startling alignment with what the Bible had described in the book of Exodus. Back then, we were arrested and even threatened with death.
A handy bit of ingenuity brought about a daring escape, but unfortunately, much of the film taken then had to be discarded in the desert. That escape of sorts was the reason we had a movie producer from Hollywood along with us on this trip into the Saudi Kingdom. Jim was doing research and scouting potential locations for filming of a major motion picture about our exploits. The movie, “The Mountain of Fire” was in the final stages of pre-production.

My first visit to Saudi Arabia was way back in 1988. Since then I found a wealth of esoteric information that existed in university libraries which overwhelmingly leaned in favor of Jabal al-Lawz as being the actual real Mount Sinai. Larry also received much confirmation from experts such as Dr. Allen Kerkeslager who wrote: “You will be pleased to find that you have some good, solid evidence for your views. A Jewish tradition dating to at least 250 bce . . . identified Mount Sinai with the highest mountain near ancient Madyan, which is the modern town of Al-bad. The most likely candidate, I have concluded, is Jabal al-Lawz.”

I was also sent a voluminous doctoral dissertation on the location of Mount Sinai in Saudi Arabia by a Dr. Chuck Whittaker. The conclusions in his dissertation were: “With the many varied arguments given in this paper demonstrating the biblical significance of Jabal al-Lawz, this site in Saudi Arabia remains the best candidate for Mount Sinai/Horeb.”

I would also learn that a host of ancient historians pointed to either Arabia or to Jabal al-Lawz directly as the real Mount Sinai. Philo of Alexandria (25 bc to ad 40) points to Arabia as the traditional location of Mount Sinai. Eusebius (4th century ad) locates “the mountain of God” in “the outlying countryside of Madiam.” He also located Madiam (Madyan) itself “toward the desert of the Saracens on the east of the Red Sea.” Jerome (4th century ad) locates Mount Sinai/Horeb “with a location near Madyan in northwestern Arabia east of the Red Sea.” And, of course, Josephus in ad 90 points directly at the highest mountain in that region of Saudi Arabia as the real Mount Sinai, which would be Jabal al-Lawz.

During my first trip up the mountain in 1988, I was overwhelmed with the idea that I was standing on ground once too holy to even touch. Perhaps it still was? Now, I was once again returning to these holy precincts and I wondered if I would again have the same profound feelings of awe that had swept over me then. I certainly knew what to expect as far as landmarks were concerned, but would my heart feel the same? It was, after all, a huge piece of Biblical history, and we might have shared in its discovery – not to mention how drastically the mountain had changed my own life's trajectory.

As I stood at the base of the mountain upon my return, my first response was mixed because of all the new small Bedouin homes and tents that now dotted the vast desert landscape. I was almost angry that such pedigreed ground was somewhat defiled in that way. The mysterious mountain with its stern rocky face still looked down at me the same as before. Its mysterious burnt rocks were still there as well as other landmarks that I remembered. There was the Golden Calf alter, the sacrificial alter at the base of the mountain with white marble pillars still strewn about.

I had always tried to keep my emotions in-check on the many other expeditions I have been on, especially when I needed a measured approach with so much riding on the moment. On all explorations you have such rare and fleeting moments of opportunity offered to you to probe about for new finds.

I was doing pretty well this time…that is until I decided to bring Larry Williams into the moment. Larry was MY companion on that first trip of discovery. We had endured so many trying, dangerous moments together; I thought it only appropriate to call him and share the experience I was now having. We had a brief time of melancholy banter revisiting our time at the mountain, and then we said our goodbyes. Ron Matsen was standing close by and seemed to sense cracks forming in my emotional dam. So much of my life has been tied to this mountain, to Larry as a trusted friend, to the vast enormity of discovery this place held in the rich panorama of Biblical history. I put my face on the shoulder of a startled Ron and lost it. It was a totally unexpected and uncharacteristic release of feelings on my part that neither he nor I had expected. I apologized to Ron, who as a pastor had offered that same shoulder as a place of solace to many before me. He however seemed to take the whole moment in stride.

We traveled the next week visiting other old and new findings which only cemented my deep held opinion this was the stage for many Biblical events in history. If it is the real Mount Sinai, it is a place that helped to define three major religions. As I bid farewell to the towering sentinel of a mountain, I believed more than ever that it is indeed the real Mount Sinai. I prayed to God that He would help me to be a good steward of my part in its discovery which will be cemented in my mind and heart for ever.

This article was originally published in the
July 2020 Personal Update NewsJournal.
For a FREE 1-Year Subscription, click here.